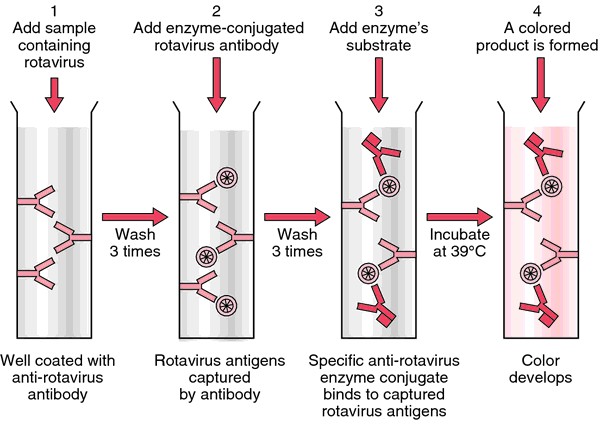 ELISA: With antigen capture ELISA, the wells are coated with antibody to the virus. The sample containing virus (1) is added and, after washing several times, enzyme conjugated to an antibody to the virus is added (2). Finally, after a further cycle of washing, the enzyme's substrate (3) is added. A colored product is formed if the viral antigen is present in the sample (4). From Hart and Shears, 1997.
microhemagglutination assay–Treponema pallidum (MHA-TP) a Treponema pallidum hemagglutination assay using microtechniques; used in the detection of syphilis.
radioreceptor assay a radioligand assay in which a radiolabeled hormone is used to measure the concentration of specific cellular receptors for the hormone in tissue specimens, an example being radioassay of estrogen receptors in breast tissue.
thyroid-stimulating hormone assay thyroid-stimulating hormone test.
Treponema pallidum hemagglutination assay (TPHA) a treponemal antigen serologic test for syphilis using tanned sheep red blood cells coated with antigen from the Nichol's strain of Treponema pallidum and treated patient serum; it is similar in sensitivity and specificity to the FTA-ABS test. This test is not useful for individuals who have had syphilis in the past.
TSH assay thyroid-stimulating hormone test.
Miller-Keane Encyclopedia and Dictionary of Medicine, Nursing, and Allied Health, Seventh Edition. © 2003 by Saunders, an imprint of Elsevier, Inc. All rights reserved.

(ĭ-lī′zə, -sə)
n.
A sensitive immunoassay that uses an enzyme linked to an antibody or antigen as a marker for the detection of a specific protein, especially an antigen or antibody. It is often used as a diagnostic test to determine exposure to a particular infectious agent, such as the AIDS virus, by identifying antibodies present in a blood sample.
The American Heritage® Medical Dictionary Copyright © 2007, 2004 by Houghton Mifflin Company. Published by Houghton Mifflin Company. All rights reserved.
Enzyme-Linked Immunosorbent Assay. An immunoenzymatic assay used to measure antigens and antibodies which approaches the sensitivity of RIA
Pros Lower cost, simpler equipment, faster ‘turn-around time’, and none of the problems inherent in handling radioactive substances
Segen's Medical Dictionary. © 2012 Farlex, Inc. All rights reserved.

Enzyme-linked immunosorbent assay. This test has been used a screening test for AIDS for many years and has also been used to detect gonorrhea bacteria.
Mentioned in: Gonorrhea
Gale Encyclopedia of Medicine. Copyright 2008 The Gale Group, Inc. All rights reserved.

Feedback
Flashcards & Bookmarks ?
Please log in or register to use Flashcards and Bookmarks. You can also log in with
Flashcards ?
My bookmarks ?
+ Add current page to bookmarks
Mentioned in ?
References in periodicals archive ?
Since it is the practice in the US to treat this cause of pharyngitis, current recommendations for diagnosis state that a confirmatory culture should be obtained in patients with a negative rapid strep antigen test. This strategy can be cumbersome in clinical practice, may delay treatment, and result in unnecessary use of antibiotics while awaiting culture results.
Negative antigen test misses <5% of strep pharyngitis
pneumophila urinary antigen test should not be used to rule out L.
Legionella longbeachae and endocarditis
The most commonly described methods of virus testing are immunochromatographic rapid antigen tests, nucleic-acid-amplification-based tests, immunoflourescence-based tests, and virus culture.
The continued rise of respiratory viruses
Using only the suppurative complications in patients who received culture or rapid antigen test before the visit, the study would have the power to detect an increase of 0.08% to 0.19%.
Culture Confirmation of Negative Rapid Strep Test Results
The overall sensitivity of rapid antigen tests for group A streptococcus has declined in recent years.
Genetic testing for group A strep infection on the horizon. (Marriage Of Speed and Accuracy)
pneumophila serogroup 1 by specific urinary antigen test and culture, but they recovered and were discharged.
Legionnaires' disease and travel in Europe
More men are asking to have a prostate specific antigen test, which is available to men over 50.
Prostate cancer net help
For adults, guidelines that recommend against testing those with a low clinical likelihood of GAS infection and against using throat culture to confirm negative rapid antigen test results could lead to a substantial number of missed GAS pharyngitis cases, while selective use of throat cultures is compatible with a goal of reducing antibiotic use and unnecessary prescribing of antibiotics.
Guidelines compared for identifying, treating group A strep pharyngitis: reducing antibiotic use
Until then, not following a negative rapid antigen test for Streptococcus--more commonly known as group A streptococcus--with a traditional laboratory culture may put patients at risk for serious sequelae, he said.
Genetic Tests for Strep a infection on the Horizon. (Marriage of Speed and Accuracy)
In our study, we compared streptococcal complication rates at a large suburban medical center during 2 time periods: when pharyngitis patients were managed almost exclusively with throat culture and when they were managed primarily with a high-sensitivity antigen test without culture confirmation of negative results.
Use of a High-Sensitivity Rapid Strep Test Without Culture Confirmation of Negative Results
30% - 34% Plasma/serum tests for drugs of abuse; rapid tests or urinary tract infections; serum cholesterol testing; Neisseria gonorrhoea presumptive identification; rapid tests for measles; Giardia antigen test. 25% - 29% Cryptosporidium antigen tests; Giardia microscopy; high-volume water sampling for enteric pathogens; HIV, indirect immunofluorescence (IIF); Chlamydia antigen EIA; Chlamydia DNA PCR; gonorrhea disk diffusion; Listeria culture; hepatitis B antigen; tests for hepatitis C virus.
Laboratory services and training in support of the Year 2000 National Health Objectives