immunity associated with circulating antibodies, in contradistinction to cellular immunity. The inherent range of activity of antibody specificities is wide but proliferation of antigen-specific B cells occurs rapidly during infections leading to rapid increases in antibody titers with enhanced affinity for the inciting agent, and a more effective and directed response.
Farlex Partner Medical Dictionary © Farlex 2012 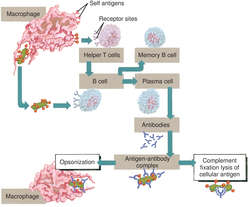 The protective activities of antibodies against infection or reinfection by common organisms, e.g., streptococci and staphylococci. B lymphocytes with receptors to a specific antigen react when they encounter that antigen by producing plasma cells (which produce antigen-specific antibodies) and memory cells (which enable the body to produce these antibodies quickly in the event that the same antigen appears later). B-cell differentiation also is stimulated by interleukin-2 (IL-2) secreted by CD4+ T cells and foreign antigens processed by macrophages.

Antibodies produced by plasma B cells, found mainly in the blood, spleen, and lymph nodes, neutralize or destroy antigens in several ways. They kill organisms by activating the complement system; neutralize viruses and toxins released by bacteria; coat the antigen (opsonization) or form an antigen-antibody complex to stimulate phagocytosis; promote antigen clumping (agglutination); and prevent the antigen from adhering to host cells.

Feedback
Flashcards & Bookmarks ?
Please log in or register to use Flashcards and Bookmarks. You can also log in with
Flashcards ?
My bookmarks ?
+ Add current page to bookmarks
Mentioned in ?
References in periodicals archive ?
Currently no drugs are available that specifically counteract the activity of preformed toxins, while toxin neutralization is a classical property of antibody-mediated immunity. For certain conditions, antibody therapy may have some advantages over antimicrobial therapy.
Passive antibody administration (immediate immunity) as a specific defense against biological weapons. (Perspective)