[mus´'l]
a bundle of long slender cells (muscle fibers) that have the power to contract and hence to produce movement. Muscles are responsible for locomotion and play an important part in performing vital body functions. They also protect the contents of the abdomen against injury and help support the body. See appendix 3-4 and see color plates.

Muscle fibers range in length from a few hundred thousandths of a centimeter to several centimeters. They also vary in shape, and in color from white to deep red. Each fiber receives its own nerve impulses, so that fine and varied motions are possible. Each has its small stored supply of glycogen, which it uses as fuel for energy. Muscles, especially the heart, also use free fatty acids as fuel. At the signal of an impulse traveling down the nerve, the muscle fiber changes chemical energy into mechanical energy, and the result is muscle contraction.

Some muscles are attached to bones by tendons. Others are attached to other muscles, or to skin (producing the smile, the wink, and other facial expressions, for example). All or part of the walls of hollow internal organs, such as the heart, stomach, intestines, and blood vessels, are composed of muscles. The last stages of swallowing and of peristalsis are actually series of contractions by the muscles in the walls of the organs involved.
Types of Muscle. There are three types of muscle: involuntary, voluntary, and cardiac, composed respectively of smooth, striated, and mixed smooth and striated tissue. 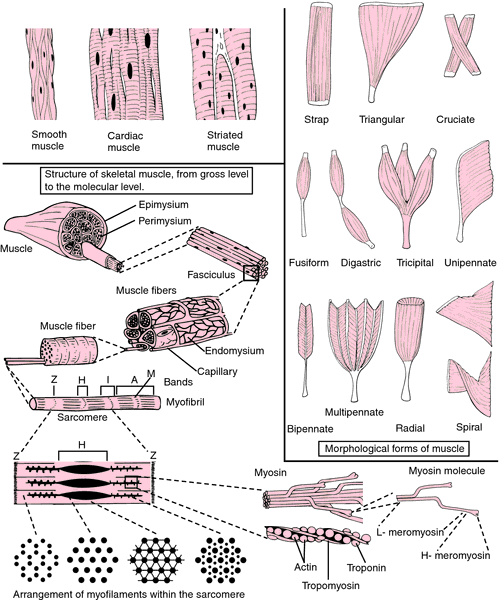 Types and structure of muscle. From Dorland's, 2000.

Involuntary muscles are those not under the control of the conscious part of the brain; they respond to the nerve impulses of the autonomic nervous system. They include the countless short-fibered, or smooth, muscles of the internal organs and power the digestive tract, the pupils of the eyes, and all other involuntary mechanisms.

Voluntary muscles are those controlled by the conscious part of the brain, and are striated. These are the skeletal muscles that enable the body to move, and there are more than 600 of them in the human body. Their fibers are grouped together in sheaths of muscle cells. Groups of fibers are bundled together into fascicles, surrounded by a tough sheet of connective tissue to form a muscle group such as the biceps. Unlike the involuntary muscles, which can remain in a state of contraction for long periods without tiring and are capable of sustained rhythmic contractions, the voluntary muscles are readily subject to fatigue.

Cardiac muscles (the muscles of the heart) are the third kind; they are involuntary and consist of striated fibers different from those of voluntary muscle. The contraction and relaxation of cardiac muscle continues at a rhythmic pace until death unless the muscle is injured in some way.

Voluntary muscles extend from one bone to another, cause movements by contraction, and work on the principle of leverage. For every direct action made by a muscle, an antagonistic muscle can cause an opposite movement. To flex the arm, the biceps contracts and the triceps relaxes; to extend the arm, the triceps contracts and the biceps relaxes.
(See also heart.)
Physiology of Muscles. No muscle stays completely relaxed, and as long as a person is conscious, it remains slightly contracted. This condition is called tonus, or tone. It keeps the bones in place and enables a posture to be maintained. It allows a person to remain standing, sitting up straight, kneeling, or in any other natural position. Muscles also have elasticity. They are capable of being stretched and of performing reflex actions. This is made possible by the motor and sensory nerves which serve the muscles.

Muscles enable the body to perform different types of movement. Those that bend a limb at a joint, raising a thigh or bending an elbow, are called flexors. Those that straighten a limb are called extensors. Others, the abductors, make possible movement away from the midline of the body, whereas the adductors permit movement toward the midline. Muscles always act in opposing groups. In bending an elbow or flexing a muscle, for example, the biceps (flexor) contracts and the triceps (extensor) relaxes. The reverse happens in straightening the elbow.

A muscle that has contracted many times, and has exhausted its stores of glycogen and other substances, and accumulated too much lactic acid, becomes unable to contract further and suffers from fatigue. In prolonged exhausting work, fat in the muscles can also be used for energy, and as a consequence the muscles become leaner.
agonistic muscle one opposed in action by another muscle, the antagonistic muscle. Called also agonist.
antagonistic muscle one that counteracts the action of another (the agonistic muscle). Called also antagonist.
appendicular muscle one of the muscles of a limb.
articular muscle one that has one end attached to the capsule of a joint.
auricular m's
1. the extrinsic auricular muscles, including the anterior, posterior, and superior auricular muscles. See appendix 3-4.
2. the intrinsic auricular muscles that extend from one part of the auricle to another, including the helicis major, helicis minor, tragicus, antitragicus, transverse auricular, and oblique auricular muscles. See appendix 3-4.
cruciate muscle a muscle in which the fiber bundles are arranged in the shape of an X.
cutaneous muscle striated muscle that inserts into the skin.
deltoid muscle the muscular cap of the shoulder, often used as a site for an intramuscular injection. See appendix 3-4.
extraocular m's the six voluntary muscles that move the eyeball: superior, inferior, middle, and lateral recti, and superior and inferior oblique muscles. See appendix 3-4.
extrinsic muscle one that originates in another part than that of its insertion, as those originating outside the eye, which move the eyeball.
fixation m's (fixator m's) accessory muscles that serve to steady a part.
gluteal m's three muscles, the greatest, middle, and least, that extend, abduct, and rotate the thigh. See appendix 3-4.
hamstring m's the muscles of the back of the thigh, including the biceps femoris, semitendinosus, and semimembranosus. See appendix 3-4.
intraocular m's the intrinsic muscles of the eyeball. See appendix 3-4.
intrinsic muscle one whose origin and insertion are both in the same part or organ, as those entirely within the eye.
multipennate muscle a muscle in which the fiber bundles converge to several tendons.
palatine m's the intrinsic and extrinsic muscles that act upon the soft palate.
pectoral m's four muscles of the chest; See appendix 3-4.
quadrate muscle a square-shaped muscle; see appendix 3-4.
quadriceps muscle a name applied collectively to four muscles of the thigh; see anatomic Table of Muscles in the Appendices.
scalene m's four muscles of the upper thorax that raise the first two ribs, aiding in respiration. See appendix 3-4.
skeletal m's striated muscles that are attached to bones and typically cross at least one joint.
sphincter muscle a ringlike muscle that closes a natural orifice; called also sphincter.
synergic m's (synergistic m's) those that assist one another in action.
thenar m's the abductor and flexor muscles of the thumb. See appendix 3-4.
triangular muscle a muscle that is triangular in shape.
yoked m's those that normally act simultaneously and equally, as in moving the eyes.
Miller-Keane Encyclopedia and Dictionary of Medicine, Nursing, and Allied Health, Seventh Edition. © 2003 by Saunders, an imprint of Elsevier, Inc. All rights reserved.

any muscle which acts in opposition to another, e.g. a contractor to a relaxor or vice versa.
Collins Dictionary of Biology, 3rd ed. © W. G. Hale, V. A. Saunders, J. P. Margham 2005