American Nimodipine Study. A clinical trial that assessed nimodipine’s effect on mortality in post-acute stroke patients.
Conclusions Nimodipine has no effect on patients at 48 hours, but may be beneficial at 18 hours. 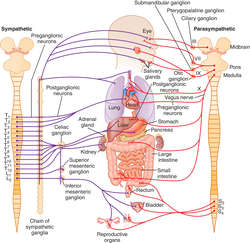 AUTONOMIC NERVOUS SYSTEM
The parts of the nervous system that control unconscious, involuntary, and visceral body functions. The autonomic nervous system reflexively balances the body's smooth muscle tone, blood pressure, temperature, fluid composition, state of digestion, metabolic activity, and sexual activation. In the central nervous system (CNS), the activities of the autonomic nervous system (ANS) are coordinated in the brainstem (especially in the nucleus of the tractus solitarius) and in the hypothalamus. In the peripheral nervous system (PNS), the ANS comprises the visceral motor axons, the visceral sensory axons, and the enteric nervous system (a neural net within the walls of the gastrointestinal tract). Compared to peripheral somatic axons, the peripheral autonomic axons tend to be small (less than 3 µm in diameter), slowly conducting, and sparsely myelinated. The autonomic motor circuits also differ from somatic motor pathways. Peripheral somatic motor pathways, i.e., the circuitry sending signals to skeletal muscles, are only one axon long; axons of somatic motor neurons in the spinal cord and brainstem synapse directly on the effector cell, a muscle cell. In contrast, peripheral autonomic motor pathways are two axons long. First, an axon (a preganglionic axon) of a visceral motor neuron in the spinal cord or brainstem synapses on a neuron in a peripheral ganglion. Second, the axon (a postganglionic axon) of the ganglion neuron synapses on the effector cell, a smooth muscle cell, a cardiac muscle cell, or a secretory cell.

The ANS is distributed throughout the body, and autonomic dysfunction can produce a wide range of symptoms, such as bladder malfunction, blood pressure abnormalities, breathing difficulty, gastrointestinal motility problems, heart arrhythmias, impotence, nasal congestion, sweating disorders, syncope, and visual symptoms. Drugs that act on or mimic autonomic neurotransmitters are commonly used to alleviate these symptoms as well as other conditions, such as glaucoma, heart failure, shock, and thyroid storm. To assess the overall functioning of the ANS, physicians often begin with simple measurements of the reflexive responses of the cardiovascular system; specifically, they measure the changes of blood pressure and heart rate as a person stands from sitting and exercises.

The part of the nervous system that supplies nerve endings in the blood vessels, heart, intestines, glands, and smooth muscles, and governs their involuntary functioning. The autonomic nervous system is responsible for the biochemical changes involved in experiences of anxiety.
Mentioned in: Anxiety