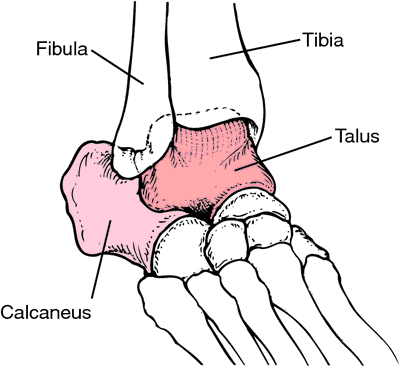 Ankle.
The ankle is a hinge joint formed by the junction of the tibia and fibula with the talus (ankle bone). The bones are cushioned by cartilage and connected by a number of ligaments, tendons, and muscles that strengthen the joint and enable it to be moved. Because it is in almost constant use, the ankle is particularly susceptible to injuries, such as sprain and fracture. It is also often one of the first joints to be affected by arthritis or gout.
tarsus (def. 2).
talus.
ankle cuff a weighted strip wrapped around the ankle and closed with a Velcro band; used during exercise.
Miller-Keane Encyclopedia and Dictionary of Medicine, Nursing, and Allied Health, Seventh Edition. © 2003 by Saunders, an imprint of Elsevier, Inc. All rights reserved.

(ăng′kəl)
n.
1. The joint formed by the articulation of the lower leg bones with the talus. The ankle connects the foot with the leg.
2. The slender section of the leg immediately above the foot.
The American Heritage® Medical Dictionary Copyright © 2007, 2004 by Houghton Mifflin Company. Published by Houghton Mifflin Company. All rights reserved.

The joint between the lower ends of the TIBIA and FIBULA and the upper surface of the talus bone of the foot. The talus sits on top of the heel bone (calcaneum).
Collins Dictionary of Medicine © Robert M. Youngson 2004, 2005

A. it does two helpful things- lower the pain (cold can do that) and prevent swelling. the swelling is a body normal reaction that protects the area that was injured. but we would like to avoid it because it'll strain us.
More discussions about ankle
This content is provided by iMedix and is subject to iMedix Terms. The Questions and Answers are not endorsed or recommended and are made available by patients, not doctors.

Feedback
Flashcards & Bookmarks ?
Please log in or register to use Flashcards and Bookmarks. You can also log in with
Flashcards ?
My bookmarks ?
+ Add current page to bookmarks
Mentioned in ?
References in classic literature ?
The fettered ankle halted his first step, but he stretched at full length along the table, extending eager fingers toward the prize.
Fetching it he unlocked the fetter from about the creature's ankle, locked it empty and carried the key farther down into the burrow.
View in context
Also, he recinched the injured ankle and prepared himself for a day of travel.
He hopped and bobbed clumsily along on his injured ankle, throwing stones and screaming hoarsely at times; at other times hopping and bobbing silently along, picking himself up grimly and patiently when he fell, or rubbing his eyes with his hand when the giddiness threatened to overpower him.
View in context
He told me all about the time he broke his ankle when he was a boy.
View in context
"My ankle does hurt yet," admitted the girl, attempting a limping step.
I slipped on the sidewalk and turned my ankle. I could not walk, so I hobbled into a restaurant and sat there until I was better.
View in context
Rose took part in all the fun, and never betrayed by look or word the twinges of pain she suffered in her ankle. She excused herself from the games in the evening, however, and sat talking to Uncle Alec in a lively way, that both amazed and delighted him; for she confided to him that she played horse with the children, drilled with the light infantry, climbed trees, and did other dreadful things that would have caused the aunts to cry aloud if they knew of them.
I sprained my ankle when I tumbled off of Barkis, and it gets worse and worse; though I've done all I know to cure it and hide it, so it shouldn't trouble anyone," whispered Rose, knitting her brows with pain, as she prepared to descend, wishing her uncle would take her instead of her bundles.
View in context
The whole appearance of this warrior and his retinue was wild and outlandish; the dress of his squires was gorgeous, and his Eastern attendants wore silver collars round their throats, and bracelets of the same metal upon their swarthy arms and legs, of which the former were naked from the elbow, and the latter from mid-leg to ankle. Silk and embroidery distinguished their dresses, and marked the wealth and importance of their master; forming, at the same time, a striking contrast with the martial simplicity of his own attire.
View in context
In grim, deliberate silence, while Dora watched him with the fascination of horror, Davy stepped off the green grass of the roadside, ankle deep into the fine dust which four weeks of rainless weather had made on the road, and marched along in it, shuffling his feet viciously until he was enveloped in a hazy cloud.
View in context
And Hannibal exposed his nose and with his red tongue licked again the tan shoe and the slender, tan-silken ankle that he could have destroyed with one crunch.
View in context