a serious disease caused by Leishmania braziliensis, L. braziliensis, and L. braziliensis panamensis endemic in southern Mexico and Central and South America, except for northern Chile; the organism does not invade the viscera, and the disease is limited to the skin and mucous membranes; the lesions resemble the sores of cutaneous leishmaniasis caused by L. mexicana or L. tropica; the chancrous sores heal after a time, but some months or years later, fungating and eroding forms of ulceration may appear on the tongue, buccal or nasal mucosa, and pharynx; many variants of the disease exist, marked by differences in distribution, vector, epidemiology, and pathology, which suggest that it may in fact be caused by a number of closely related etiologic agents.
See also: espundia.
Synonym(s): American leishmaniasis, leishmaniasis americana, bubas, nasopharyngeal leishmaniasis, New World leishmaniasis
Farlex Partner Medical Dictionary © Farlex 2012

(myū'kō-kyū-tā'nē-ŭs lēsh'mă-nī'ă-sis)
A grave disease caused by Leishmania braziliensis complex, endemic in Mexico and Central and South America. The organism does not invade the viscera, and the disease is limited to the skin and mucous membranes, the lesions resembling the sores of cutaneous leishmaniasis. The sores heal after a time, but some months or years later, fungating and eroding forms of ulceration may appear on the tongue and buccal or nasal mucosa.
See also: espundia
Synonym(s): American leishmaniasis, nasopharyngeal leishmaniasis, New World leishmaniasis.
Medical Dictionary for the Health Professions and Nursing © Farlex 2012 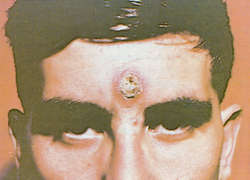