(P) [pu´pil]
the opening in the center of the iris through which light enters the eye; see also Plate 17.
Adie's pupil tonic pupil.
Argyll Robertson pupil one that is miotic and responds to accommodation effort, but not to light.
fixed pupil a pupil that does not react either to light or on convergence, or in accommodation.
Hutchinson's pupil one that is dilated while the other is not.
tonic pupil a usually unilateral condition of the eye in which the affected pupil is larger than the other, responds to accommodation and convergence in a slow, delayed fashion, and reacts to light only after prolonged exposure to dark or light; see also adie's syndrome. Called also Adie's pupil.
Miller-Keane Encyclopedia and Dictionary of Medicine, Nursing, and Allied Health, Seventh Edition. © 2003 by Saunders, an imprint of Elsevier, Inc. All rights reserved.

(pyū'pĭl), [TA]
The circular orifice in the center of the iris, through which the light rays enter the eye.
Synonym(s): pupilla [TA]
[L. pupilla]
Farlex Partner Medical Dictionary © Farlex 2012

(p) (pyū'pil) [TA]
The circular orifice in the center of the iris, through which light rays enter the eye.
Synonym(s): pupilla [TA] .
[L. pupilla]
Medical Dictionary for the Health Professions and Nursing © Farlex 2012 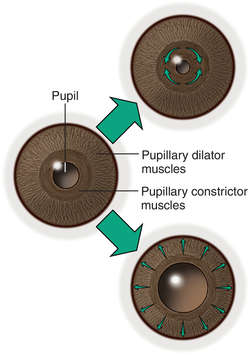 The circular opening in the centre of the iris of the eye. The pupil becomes smaller (constricts) in bright light and widens in dim light under the action, respectively of its circular and radial muscle fibres.
Collins Dictionary of Medicine © Robert M. Youngson 2004, 2005

the central opening in the iris of the vertebrate eye through which the light passes to the lens and retina. It changes in size as a result of muscle contraction and expansion moving the iris.
Collins Dictionary of Biology, 3rd ed. © W. G. Hale, V. A. Saunders, J. P. Margham 2005

The part of the eye that looks like a black circle in the center of the iris. It is actually an opening through which light passes.
Mentioned in: Eye Cancer, Eye Examination, Hyperopia, Radial Keratotomy, Uveitis
Gale Encyclopedia of Medicine. Copyright 2008 The Gale Group, Inc. All rights reserved.

Aperture within the iris, normally circular, through which light penetrates into the eye. It is located slightly nasally to the centre of the iris. Its diameter can vary from about 2 to 8 mm. It is often slightly smaller in old age. The function of the pupil is to regulate the amount of light admitted into the eye, to optimize the depth of focus and to mitigate ocular aberrations. See acorea; anisocoria; corectopia; dicoria; dyscoria; hippus; iridectomy; microcoria; miosis; dilator pupillae muscle; sphincter pupillae muscle; mydriasis; Edinger-Westphal nucleus; polycoria; polyopia; pupil light reflex.
Adie's pupil A pupil in which the reactions to light, direct or consensual, are almost abolished, with a reaction occurring only after prolonged exposure to light or dark. The reaction of the pupil to a near target is also delayed and slow. The condition is usually unilateral, with the affected pupil being the larger of the two (anisocoria). It may be due to a disease of, or injury to, the ciliary ganglion or to the short ciliary nerves. Other causes include temporal arteritis in elderly patients, syphilis or diabetes. Syn. myotonic pupil; pupillotonia; tonic pupil (some authors use this last term when the cause is known and Adie's pupil when the cause is unidentified). See efferent pupillary defect; Adie's syndrome; pupil light reflex.
amaurotic pupil Miotic pupil that does not react to direct and consensual ipsilateral light stimulation, but does react consensually to contralateral stimulation. It is most often noted in cases of severe optic nerve dysfunction or retinal disease.
apparent pupil See entrance pupil of the eye.
Argyll Robertson pupil Pupil that reacts when the eye accommodates and converges but fails to react directly and consensually to light. The condition is bilateral, the pupils are small and usually unequal. It is usually a sign of neurosyphilis. See iridoplegia; tabes dorsalis.
artificial pupil 1. Pupil made by iridectomy. 2. A circular aperture made in a diaphragm which can be mounted in front of the eye to provide a constant and smaller pupil size. It is used in research but also as a clinical test. See pinhole disc.
pupil block See pupillary block.
pupil constriction See miosis; pupil light reflex.
pupil dilatation See mydriatic; pupil light reflex.
ectopic pupil See corectopia.
entrance pupil of the eye This is the image of the iris aperture formed by the cornea. It is what one sees when one looks at an eye. It is some 13% larger than the real pupil and located slightly in front of it. Syn. apparent pupil (Fig. P23).
exit pupil of the eye This is the image of the iris aperture formed by the crystalline lens. It is slightly larger (,3%) than the real pupil and situated slightly behind it (Fig. P23).
Horner's pupil See syndrome, Horner's.
Hutchinson's pupil A pupil that is dilated and completely inactive to all stimuli. It is associated with lesions of the central nervous system, as may occur in head injury.
keyhole pupil A pupil shaped like a keyhole due to iridectomy in which a section of the iris extending from the pupillary margin to the periphery has been excised, or due to coloboma or trauma to the iris.
pupil light reflex See pupil light reflex.
Marcus Gunn pupil A defect of the pupillary reflex characterized by a smaller constriction of both pupils when the affected eye is stimulated by light as compared to that occurring when the normal eye is stimulated. It is easier, however, to observe this phenomenon when swinging a light from one eye to the other in a darkened room while the subject is fixating a distant object (this is called the swinging flashlight test) (Fig. P24). Stimulation of the normal eye will cause constriction of both pupils whereas rapid stimulation of the affected eye will lead to a small dilatation (a paradoxical reaction, sometimes referred to as pupillary escape). This condition is due to a lesion in one retina or in one of the optic nerves, optic chiasma, optic tract, or the pretectal olivary nucleus that affects the afferent pupillary pathway. It is often the result of central or branch retinal or vein occlusion, extensive retinal detachment, retrobulbar optic neuritis, compressive optic neuropathy, or optic tract lesion, etc. Syn. relative afferent pupillary defect (RAPD), if the magnitude of the effect is partial; afferent pupillary defect (APD), if it is complete.
myotonic pupil See Adie's pupil.
pupil reflex See pupil reflex.
tonic pupil See Adie's pupil.
white pupil See leukocoria. 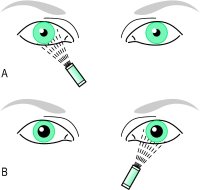