a progressive disease characterized by formation of multiple cysts of varying size scattered diffusely throughout both kidneys, resulting in compression and destruction of renal parenchyma, usually with hypertension, gross hematuria, and uremia leading to progressive renal failure. There are two major types: with onset in infancy or early childhood, usually of autosomal recessive inheritance [MIM*263200]; with onset in adulthood, of autosomal dominant inheritance with genetic heterogeneity [MIM*173900, 173910, and 600666]; may be caused by mutation in either polycystin-1 gene on chromosome 16p, polycystin-2 gene on 4q, or gene(s) not identified yet.
Synonym(s): multicystic kidney, polycystic disease of kidneys

, polycystic disease of kidneys (pol'ē-sis'tik kid'nē, di-zēz' kid'nēz)
A progressive disease characterized by formation of multiple cysts of varying size scattered diffusely throughout both kidneys, resulting in compression and destruction of kidney parenchyma, usually with hypertension, gross hematuria, and uremia. 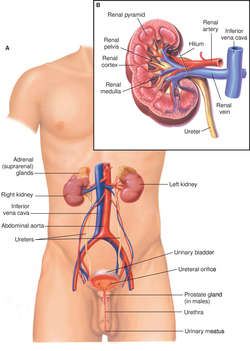 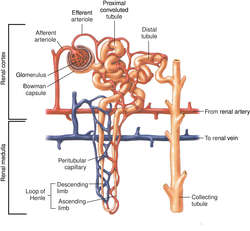 A genetically determined condition in which both kidneys are greatly enlarged and contain large numbers of cysts. Kidney function is prejudiced and most affected people suffer kidney failure or other serious complications by middle age. See also AUTOSOMAL POLYCYSTIC KIDNEY DISEASE.