[ak´ro-sōm]
the caplike, membrane-bound structure covering the anterior portion of the head of a spermatozoon; it contains enzymes involved in penetration of the ovum. 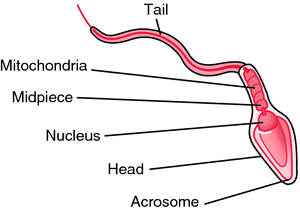 Acrosome of a spermatozoon. From Applegate, 2000.
acrosome reaction changes in the spermatozoon that result in development of perforations in the acrosome, allowing release of enzymes that facilitate fertilization.
Miller-Keane Encyclopedia and Dictionary of Medicine, Nursing, and Allied Health, Seventh Edition. © 2003 by Saunders, an imprint of Elsevier, Inc. All rights reserved.

(ak'rō-sōm),
A caplike organelle or saccule derived from Golgi elements that surround the anterior two thirds of the nucleus of a sperm. Enzymes contained within this structure probably facilitate the sperm's penetration of the zona pellucida of the oocyte.
Synonym(s): acrosomal cap, head cap
[acro- + G. soma, body]
Farlex Partner Medical Dictionary © Farlex 2012

A membrane-bound cap-like structure at the head of a spermatozoon that contains lytic enzymes—e.g., acrosin hyaluronidase—which degrade the ovum’s zona pellucida, allowing the penetration of one sperm.
Segen's Medical Dictionary. © 2012 Farlex, Inc. All rights reserved.

Reproduction biology A membrane-bound cap-like structure at the head of a spermatozoon that contains lytic enzymes–acrosin hyaluronidase which degrade the outer coat of the egg and allow the penetration of one sperm. See Acrosome reaction. Cf Capacitation.
McGraw-Hill Concise Dictionary of Modern Medicine. © 2002 by The McGraw-Hill Companies, Inc.

(ak'rō-sōm)
A caplike organelle that surrounds the anterior two thirds of the nucleus of a sperm. Within this cap are enzymes that are thought to facilitate entry of the sperm into the oocyte.
[acro- + G. soma, body]
Medical Dictionary for the Health Professions and Nursing © Farlex 2012

A tiny sac or double membrane in the head of a SPERMATOZOON that contains the digestive enzymes needed to break down the protective cell membrane of the egg (OVUM) and allow penetration. Release of these enzymes is called the acrosome reaction.
Collins Dictionary of Medicine © Robert M. Youngson 2004, 2005

a membrane-bound sac derived from the GOLGI APPARATUS, located at the tip of the sperm. The acrosome plays an important role in fertilization. It contains enzymes that, when the sac ruptures upon contact with the egg, aid in penetration of the egg membrane, so allowing transfer of the sperm nucleus to the egg cell. See Fig. 8 .
Collins Dictionary of Biology, 3rd ed. © W. G. Hale, V. A. Saunders, J. P. Margham 2005