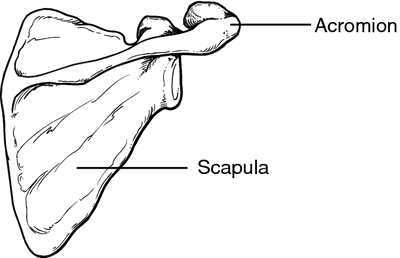 Feedback
Flashcards & Bookmarks ?
Please log in or register to use Flashcards and Bookmarks. You can also log in with
Flashcards ?
My bookmarks ?
+ Add current page to bookmarks
Mentioned in ?
References in periodicals archive ?
The maximum breadth of the acromion process was measured as the maximum distance between the lateral and the medial borders at the midpoint of the acromion process.
MORPHOMETRY OF THE ACROMION PROCESS OF HUMAN SCAPULAE AND ITS CLINICAL IMPLICATIONS
For these measurements, socket 2 was removed and a padded load cell was placed at the appropriate position and direction on or across from the acromion process. The subject was instructed to keep his or her shoulder in the same position and resist the force of the load cell while the load cell was pressed against the shoulder from above, the front, or the rear (force generated during shoulder depression could not be measured with this apparatus), and to indicate when the force applied by the load cell became uncomfortable to bear.
Design and evaluation of prosthetic shoulder controller
The Parameters Related to Scapula as a whole, Acromion Process and Glenoid Cavity were Measured using Vernier Callipers.
MORPHOMETRIC STUDY OF DRY HUMAN SCAPULAE
The UG axis was centered on the top of the subject's head; the fixed arm was aligned parallel to an imaginary line between the subject's acromion processes, and the movable arm was aligned with the subject's nose.
Efficacy of deep neck flexor exercise for neck pain: a randomized controlled study/Boyun agrisinda derin boyun fleksor egzersizinin etkinligi: randomize kontrollu calisma
Triceps skin fold thickness was measured at midway between the lateral projection of the acromion process of the scapular and the inferior margin of the olecranon process of the ulna.
Contribution of predicted skeletal mass and fat mass by anthropometric methods in determining bone mineral density in elderly Indian women
Crepitus was elicited over the acromion process and at the superior aspect of the shoulder during active abduction and external rotation.
Comminuted scapular body fractures: a report of three cases managed conservatively in chiropractic settings
We placed reflective markers on the sternal notch and bilaterally on the acromion process, lateral humeral epicondyle, ulnar styloid process, greater trochanter, lateral femoral condyle, lateral malleolus, the anterior aspect of the shoe (approximately between the first and second metatarsal), and the posterior aspect of the shoe (in the region of the calcaneus).
Obstacle crossing among people with Parkinson disease is influenced by concurrent music
Arm length was measured as the distance from the acromion process to the fingertip with the arm at the side.
Effects of a home-based yoga exercise program on flexibility in older women
The driver's height and weight (in footwear), lower limb length (from the lateral condyle of the tibia to the ground; in shoes), upper arm length (from the acromion process to the lateral epicondyle of the humerus), and lower arm length (lateral epicondyle of the humerus to the styloid process of the ulna) were measured with the driver standing outside the car.
Vehicle and Driver Attributes Affecting Distance from the Steering Wheel in Motor Vehicles
A longitudinal incision from the posterior part of the Acromion process to the lateral epicondyle was made to identify the axillary nerve, radial nerve and plate.
A study of functional, clinical and radiological outcome of fracture shaft of humerus mid and distal third managed by MIPPO technique
The vertical distance to the IEL was compared with the arm length (the distance from the inferior border of acromion process to the LE).
Anatomy of Posterior Antebrachial Cutaneous Nerve Related to the Lateral Epicondyle and Interepicondylar Line/ Anatomia del Nervio Cutaneo Posterior del Antebrazo Relacionado con el Epicondilo Lateral y la Linea Interepicondilar
Glass marble naming and locations Segment / Joint Label Location Head L/R FHD Front head marker Shoulder joint L/R ACR The midpoint on the acromion process lateral ridge Elbow joint L/R MEL Medial epicondyle of the humerus L/R LEL Lateral epicondyle of the humerus Wrist joint L/R AMWR Anterior mid-stylion L/R PMWR Posterior mid-stylion Trunk L/R ICP Tubercle of the iliac crest Knee joint L/R MKN Medial epicondyle of the femur L/R LKN Lateral epicondyle of the femur Ankle joint L/R MAN Medial malleolus of the tibia L/R LAN Lateral malleolus of the tibia Table 3.
Body segment inertial parameters of elite swimmers using DXA and indirect methods