(blŭd grūp)
The most significant and common blood group.
Medical Dictionary for the Health Professions and Nursing © Farlex 2012 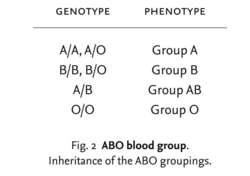 a classification of blood based on natural variation in human blood types, identified and named by Karl Landsteiner (1868–1943) in 1901. There are four groups: A, B, AB and O, each classified by a particular combination of ANTIGENS on the red blood cells (see also H-SUBSTANCE) and naturally occurring ANTIBODIES in the BLOOD PLASMA. The relative frequency of the four ABO groups in the GENE POOL has been investigated in most human populations, and differs widely between races (see Fig. 1 ).

Antigens and antibodies of the same type cause AGGLUTINATION when mixed, resulting in difficulties in blood transfusion (see UNIVERSAL DONORS and UNIVERSAL RECIPIENTS). Although possessing no A or B antigens, Group O individuals have an H-antigen (see H-SUBSTANCE which is a precursor to the A and B types. H, A and B antigens are found also in human body secretions such as saliva and semen, often a useful fact in forensic tests. See SECRETOR CONDITION.

Inheritance of grouping is controlled by a single autosomal gene (see AUTOSOME on chromosome 9 with three major ALLELES, A, B and O (sometimes written as IA, IB and IO). See Fig. 2 . Four types of the A group are now known, making six multiple alleles (see MULTIPLE ALLELISM) at this LOCUS.