A. israelii | definition of A. israelii by Medical dictionary
https://medical-dictionary.thefreedictionary.com/A.+israelii
Printer Friendly

(redirected from A. israelii)

[ki-li´tis]
inflammation of the lips.
actinic cheilitis (cheilitis acti´nica) involvement of the lips after exposure to actinic rays, with pain and swelling and development of a scaly crust on the vermilion border; it may be acute or chronic. Called also solar cheilitis. (See Atlas 3, Part E.)
angular cheilitis single or multiple fissures and cracks at the corner of the mouth on one side or both sides, which in advanced stages may spread to the lips and cheeks. Causes include primary or superimposed infection with microorganisms such as Candida albicans, staphylococci, or streptococci; poor hygiene; drooling of saliva; overclosure of the jaws in patients without teeth or with ill-fitting dentures; riboflavin deficiency; or other causes. Called also perlèche.
solar cheilitis actinic cheilitis.

, chelitis, chilitis (ki-lit'is ) [ chilo- + -itis]
Inflammation or chapping of the lips, esp. at their corners. This condition may be caused by exposure to sun, wind, or other elements or it may result from habitual lip licking. Synonym: angularcheilitis 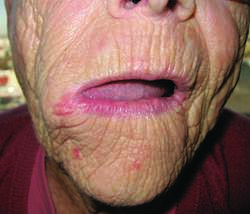 Precancerous damage to the lips (primarily the lower lip) due to excessive exposure to the sun.
Synonym: actinic cheilitis

Dermatitis of the lips resulting from chemical irritants in lipsticks, lip cream, and various other materials.

(sō'lăr kī-lī'tis)
Mucosal atrophy with drying and fissuring of the vermilion border of the lower lip in older fair-skinned people, resulting from chronic exposure to sunlight.
Synonym(s): actinic cheilitis.

Feedback
Flashcards & Bookmarks ?
Please log in or register to use Flashcards and Bookmarks. You can also log in with
Flashcards ?
My bookmarks ?
+ Add current page to bookmarks
TheFreeDictionary presents:
Write what you mean clearly and correctly.
Mentioned in ?
References in periodicals archive ?
The common strain isolated in these cases is A. israelii; however, A.
Actinomyces meyeri: A Rare Cause of Postsurgical Pelvic Actinomycosis
The fact that A. israelii can cause conjunctivitis or lacrimal canaliculitis without any generalized systemic invasion is a relatively less recognized clinical phenomenon.
A case of chronic lacrimal canaliculitis: revisiting the role of Actinomyces israelii
This may occur via contiguous or haematogenous spread from an actinomycotic focus.6 Although disease involving the spine has been reported more commonly with A. Israelii and A.
Sporadic actinomycosis of the hip complicated by Central Nervous System infection