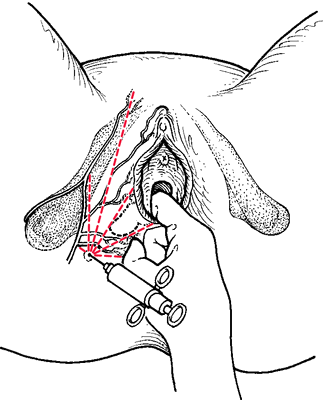 (nĕrv blok)
Interruption of conduction of impulses in peripheral nerves or nerve trunks by injection of anesthetic.
Medical Dictionary for the Health Professions and Nursing © Farlex 2012

An important method of producing an area of ANAESTHESIA by preventing nerve impulses from the area from passing to the brain. This may be done at any point along the nerve carrying sensory information from the area by injecting an anaesthetic drug around it. Nerve block anaesthesia is widely used in all forms of surgery.
Collins Dictionary of Medicine © Robert M. Youngson 2004, 2005

(nĕrv blok)
Interruption of conduction of impulses in peripheral nerves or nerve trunks by injection of local anesthetic solution.
Medical Dictionary for the Dental Professions © Farlex 2012